From time to time I’ve referred to the infirmities of old age with humor and some degree of delicacy, but in this instance delicacy may not be an option. As most of you know, the aging process for any man or beast is rarely attractive, but with luck, it can at least be somewhat dignified. I am afraid, dear reader, that for yours truly, that metaphorical ship has sailed.

Let me explain. My spine is slowly degenerating, causing my hindquarters great instability and lack of control. Those once powerful and elegant limbs are now taking on the appearance of withered and useless little twigs. With this change has come a further erosion of control in my caboose…the all-important sphincter muscles. While I exert as much manly will as I can muster, there are natural events that are beyond my control at this stage of my life.  Yesterday offered proof, several times, of these failings.

I do wear a man garment (read diaper) at night, lest there be a mishap, and in the morning Dad removes it before taking us out for our walk. The diaper is then put aside until bedtime when it is again donned. Apparently one tidy little nugget had been captured and stored in the garment’s pocket that morning because it rolled out onto the bed in the evening. Mom was not thrilled.

The next morning when Mom took us for our walk, with me tucked under her arm like a football and Lizzie trotting along underneath, I again experienced sphincter failure, and released a barrage of fecal bullets upon Lizzie’s head. Because they are firm and small, there is a ricochet effect when they strike an object, viz. Lizzie’s pea-sized head. I am sure there were people amazed by the spectacle, wondering what new meteorological phenomenon was occurring.

And so, dear reader, while this isn’t earth-shaking news it certainly figures heavily in my narrowly circumscribed world. I hope I’ve offended no one in the telling of this because I only wished to inform you of my downhill progression. Be of good cheer though, since I have no pain, have great energy, and still love food more than anything on earth (forgive me Mom and Dad…not Lizzard though). 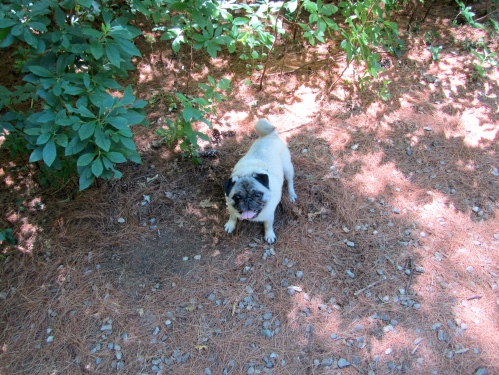 In the wild, sans diaper, enjoying a manly stroll through the woods this summer.