Tricks of the Trade, or Confessions of an Undercover Pug

In light of my most recent expose, I feel a need to offer exculpatory evidence for another activity of mine. While the activity does not involve a crime, it could be considered misleading by my human caregivers. Let me explain.

As I have mentioned in an earlier entry, I don’t always feel the necessity for relieving myself when taken outside. I do, however, understand how important it is for humans to see me perform this activity. Their faces initially appear both expectant and hopeful, move into frustration, and ultimately display disappointment and controlled anger. I am able to say with confidence, dear reader, that no pug enjoys witnessing those facial transitions. And so, being a highly intuitive and sensitive pug, I devised a plan of great subterfuge for these toilet excursions. First, I skirted the perimeter of the woods in a purposeful little trot, tail curled tightly, giving a backward glance at my grandparents. Their faces beamed with reassurance, but since I was without urgency or interest, I knew I had to mislead them in order to avoid their looks of disappointment. Off I went, back into the woods, breaking branches and small bushes, going deeper into the cover of foliage. I knew, without looking back, that they would be nodding and commenting about my need for privacy. I, however, was finding the most concealed area so I could count out the appropriate seconds required for completion of said toilet, before  bursting victoriously through the trees into the yard. Making a mad dash for the deck and back door, I waited expectantly,wearing a look of mission accomplished.

All of this seems a lot of trouble and you’re probably asking yourself why I just didn’t do what I was supposed to do and be done with it. Well, that is simple. I wasn’t ready and I didn’t want to see their faces or hear their admonishments. I wanted breakfast and I wanted it immediately. I could and would relieve myself later, when I was ready.

I hope you can understand, from a pug’s point of view, we have so little free will that there are times when we must take a stand in order to retain a shred of our independence. 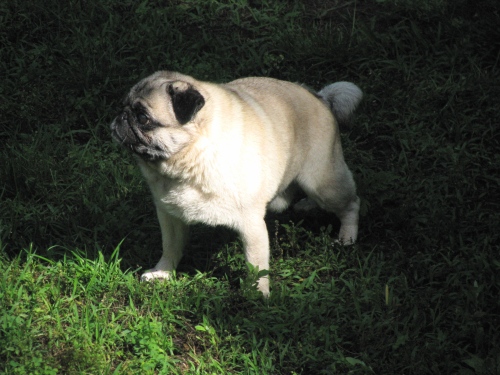 Here I am standing at the perimeter of the woods.

Evening on the sofa. That sanctimonious little Lizzie is trying to guilt me out for being tricky. I refuse to even look at her.